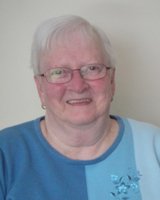 It is with great sadness that the family of Olive Louise (Hebb) Turner, age 80, of West Northfield, announce her passing on December 24, 2019, at South Shore Regional Hospital, Bridgewater. She was born in Newcombville on May 4, 1939 to the late Joseph and Annie (Hebb) Hebb, and grew up on the family farm in Newcombville. She was the last surviving member of her immediate family. She is survived by her loving husband of 54 years, Owen Arnold Turner, West Northfield and their three children, Judy (Thomas) Mailman, Bridgewater; Wade (Heidi) Turner, Bridgewater and Gail (Jason) Mercer, West Northfield. She is also survived by her grandchildren, Justin Mailman (Kara Swain), St. John’s; Jamie Lynn Mailman, Truro; Leah Turner, at home and Luke Turner, at home, and sisters-in-law, Pauline Hebb, Newcombville; Marina Hebb, Auburndale and a number of nieces and nephews. In addition to her parents she was predeceased by brothers Ervin, Russel, Percy, Douglas, Arnold and Melbourne and sisters, Edith (Henley) and Audrey (Cook). In her younger years Olive worked as a telephone operator and then stayed home to raise her children and help with the family businesses. She was faithful to her church, St. Andrew's Lutheran, and volunteered with the Northfield Fire Department auxiliary and the West Northfield Twirlettes. In later years she and Owen traveled in their motorhome, belonged to the South Shore Bluegrass Music Association, and she enjoyed knitting, playing cards and going to community suppers. Despite a 40 year battle with MS which eventually robbed her of her mobility and much of her independence, she never complained and was always cheerful, kind, and appreciative of her family and friends. A special thanks to her home care workers of the last 8 months, Brenda, Janice and Trish, whose compassion and assistance enabled her to remain in her own home until her last days, and to the doctors and nurses who did all they could to help her in her final hours. May she rest in peace after such a valiant struggle. Visitation will be held from 4 - 7 p.m., Sunday, December 29, 2019 in Sweeny's Funeral Home, 35 York Street, Bridgewater. Funeral service will be held 2 p.m., Monday, December 30, in St. Andrew's Lutheran Church, 187 Feeners Corner Road, West Northfield. Family flowers only. In lieu of flowers, memorial donations may be made to St. Andrew's Lutheran Church, West Northfield, the MS Society, Atlantic Division, or a charity of choice. On-line condolences and messages may be made by visiting www.sweenysfuneralhome.com.