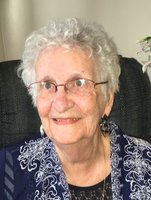 Elizabeth (Libby) Beatrice Oickle (nee Cook) - died at home on Wednesday, April 22, 2020 at the age of 92 with family by her side. Mom was born, grew up and lived most of her life in Bridgewater.

She worked in various retail stores throughout her working life. Her beautiful curiosity about people and their lives, combined with attentively listening to their stories and their lives, endeared her to all. When she was in her early seventies she auditioned and was hired as an extra in two movies that were filmed in Lunenburg County - Simon Birch and Blue Moon - where she appears in a number of scenes in the final version of each of them. She was kind to all who knew her, and strangers, alike and she was loved by all who had the pleasure of knowing her. She was an avid and skillful bridge player and over the 75 plus years since learning the game, many people had the pleasure to play it with her. She was loyal to her family and friends and never gave up, nor gave up on anyone either. Mom leaves behind to grieve many family members and friends of all ages.

A celebration of life will be held at a future time. Cremation has taken place under the direction of Sweeny's Funeral Home, Bridgewater. Donations may be made to South Shore Hospice Palliative Care Society or a charity of your choice. The family wishes to thank all the attentive and caring health care workers who have taken exceptional care of our mother over the last years.