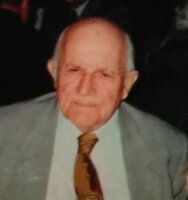 In memory of Harris John Hull

Hull, Harris John, “Johnny” - Age 89, of Hemford, Lunenburg County passed away on Sunday, April 17, 2022, at Shoreham Village in Chester. He was born in Bridgewater, Nova Scotia and was the son of the late Wilfred Clarence and Beulah Mae (Hebb) Hull.

Johnny was known to be a “jack of all trades” he did everything from picking apples to truck driving.  His main vocations where working as a mechanic and for Acadia Construction.  He was also a member of The Royal Reserve and The Snow Hawk Snowmobile Club.  Johnny valued spending time outdoors.  He had many hobbies like hunting, snowmobiling, 4-wheeling, gardening, and tinkering on small projects. Johnny enjoyed spending the summer months at the cabin boating and fishing. He was also an avid traveller, guitar player, singer, and card player.

Johnny was predeceased by his partner, Lillian Mackay; sister, Beulah Ramey; and brothers, Alvin Hull and Lindsay Hull.  He will be remembered by stepdaughter, Susan Mackay; brother, Wilfred Hull and family.

Visitation will on Wednesday, April 20th, 2022, from 7 - 8 p.m., at Sweeny’s Funeral Home, 4895 Highway 10, New Germany.  Private family funeral service will be held at Sweeny’s Funeral Home in New Germany. Interment will follow at the Hemford Cemetery, Hemford. Family flowers only. Donations can be made in memory of Johnny to South Shore Regional Hospital or Hemford Cemetery.  Online messages and condolences may be made by visiting www.sweenysfuneralhome.com.