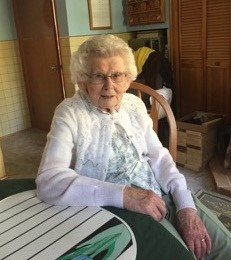 BUSH, Vivian Eileen - Heaven is becoming a more pristine and efficient place with the arrival of Vivian Eileen Bush. There will be rose bushes, gladiolas, and prize-winning dahlias, not to mention shiny and polished surfaces bursting out everywhere. Mom passed from this life at the age of 94 on Saturday, July 3rd, 2021. She was born on the 20th of October, 1926; one of 16 children to Elvira (Conrad) and Foster Richard. With the exception of a few trips to Montreal, Toronto, and Halifax, Mom spent all of her 94 years in Petite Riviere.

Even though she didn’t wander far from her birthplace, she led a full and challenging life. After excelling at the Petite Riviere School; Mom got her first job at the age of 14. By 15, she had secured a maid’s position at the Arenburg House and the following year took on the task of Head Housekeeper for the local Doctor and Mrs. Cameron. She remained in that position for the next 6 years. During that period, she had lots of time to attend the local dances at the various community halls where she met a young, handsome guitar player; our Dad. Despite having lots of suitors in her younger years; she only had eyes for him. They married when she was 22 and eventually had 3 sons. It wasn’t long after their marriage that Dad had to leave Nova Scotia to work on the oil tankers, ending up in Montreal with Shell. He was often away for 10 to 11 months of the year so the running of the house and the raising of the family essentially fell on Mom’s shoulders and she excelled at that too. It wasn’t until two of the three of us were out on our own that Dad finally retired in 1978.

Mom was a prolific knitter; a world class baker and pickler; a flower and vegetable gardener extraordinaire; and she kept a house where people commented that you could eat off the floors. She was a lifelong member and a generous supporter of Wesley United Church and a past member of the Women’s Institute.

Her final years were challenging ones as her mobility was limited and she was forced to use a walker. As Mom lost the ability to care for her garden, mow her lawn, bring in her wood, clean her house and make her meals; Alan stepped up and took on each of these tasks despite having a home of his own to maintain and a full-time job. In doing this, Mom was able to remain in the home she and Dad bought so many years ago. She was, and we all are, forever grateful for this. Despite her limitations, and to the end, Mom was still able to care for herself, do her own laundry, and make her own bed. She will be missed by all of us.

A graveside srevice will be held on July 31, 2021 at 1 p.m. at the Wesley United Church Cemetery in Petite Riviere.

Memorial donations may be made to Wesley United Church, 22 Drews Hill Rd, LaHave, NS B0R 1C0, or any charity of your choice. A graveside service will be held at a later date. On-line condolences and messages may be made by visiting: www.sweenysfuneralhome.com

Share Your Memory of
Vivian
Upload Your Memory View All Memories
Be the first to upload a memory!
Share A Memory