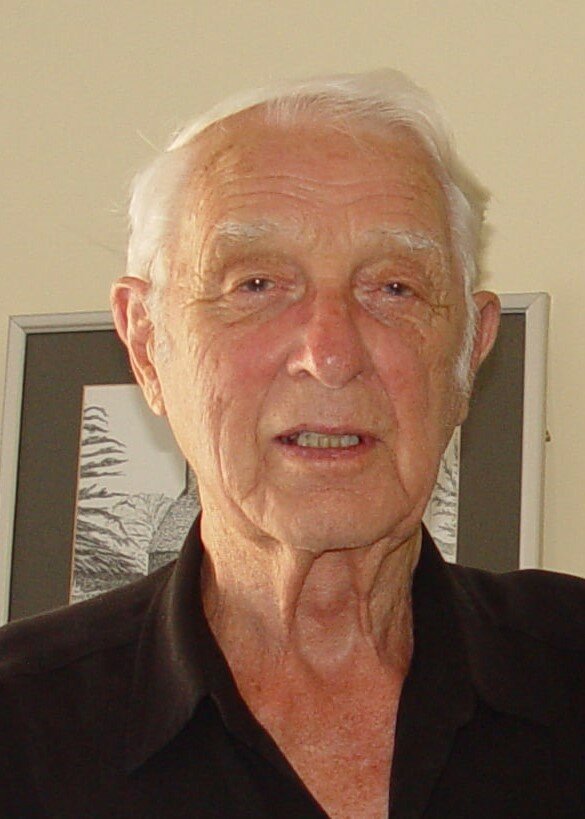 DORÉ, Walter Alden - The Family of Walter Doré, 95, is sad to announce his passing on Tuesday, March 8, 2022 in Bridgewater, Nova Scotia. Walter Alden Doré was born May 3, 1926 in London, England, the surviving son of twins, to Louis and Beatrice Doré.

The Doré family moved to Canada in 1928, settling in Montreal, Quebec. At the age of eight, Walter contracted tuberculosis, spending a year of his young life in hospital in Montreal. This would have a profound effect on his outlook on life. Thankfully, during his year long confinement, he had a friend, Oscar, in the adjoining bed, spending their days racing smuggled in windup cars to the annoyance of the nurses. He and Oscar remained friends into adulthood, even as Oscar made his way into the jazz world, as the great Oscar Peterson.

In his 13th year, Walter left school to help support his family, along with his brothers and became a telegram messenger boy on the streets of Montreal. The coming of WWII saw Walter and his brothers, Norman and Laurie enlisting for military duty. Walter was a member of both the artillery and the Air Force during his service. One of his proudest days was guarding a captured German U-Boat during the VE Day celebrations in Halifax in 1945. After the war, Walter attended the Hartford Insurance Institute in Connecticut, becoming one of its youngest graduates. During a ski trip in the Laurentian Mountains in 1947, Walter met the love of his life, Barbara Hanna, marrying in Ottawa in June, 1950. Moving to Toronto, they welcomed their first son, Philip. Soon after, Walter joined the newly formed Industrial Development Bank (later FBDB) and was transferred to London, Ontario. Here, Walter and Barbara set down roots, building a home and being blessed with 4 more children, Michael, Kathryn, Leslie and Heather.

In 1967, Walter was transferred to Halifax, Nova Scotia, where he had been stationed during the war. He loved being back in Nova Scotia, and it was with great regret that he was once again transferred to Chatham, Ontario. In 1983, he left the Bank, moving to South Surrey/White Rock in British Columbia, near his brother, Norman. He once more took up being an insurance agent for a few years, before settling upon becoming a real estate agent, retiring at the age of 72.

Dad was passionate about many things. He loved history, art/ antiques, British comedies like Monty Python and Fawlty Towers, travelling, and stamp/coin collecting. His time in the TB hospital turned him into an avid sportsman, and he was a competitive tennis player, as well as badminton player, golfer, curler, and card player. Dad, in his senior years, loved a rousing round of BIC with his son, Mike, afterwards spending the night rooting for their beloved Montreal Canadiens on tv. In 2010, we lost our beloved mother and sister, Leslie, in quick succession. Dad made the decision to move back across the country, aged 86, settling into Drumlin Hills Seniors Apartments in Bridgewater. There he happily remained, making many new friends, until being hospitalized after a fall in January. He died suddenly, but peacefully, in hospital 2 months later.

He was predeceased by his parents, Louis and Beatrice (nee Critchley); his brothers, Norman, Laurie and Alden; his wife of 60 years, Barbara (nee Hanna); and daughter, Leslie.

He lived a very long life, full of many adventures, and we will miss him dearly. Funeral Arrangements are under the care and direction of Sweeny’s Funeral Home, 35 York Street, Bridgewater. On-line condolences may be made by visiting www.sweenysfuneralhome.com

Share Your Memory of
Walter
Upload Your Memory View All Memories
Be the first to upload a memory!
Share A Memory