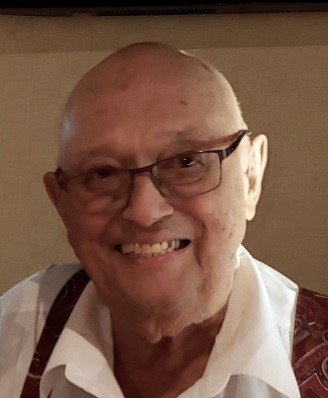 BELL, Robert Eugene “Bob” – (of Bridgewater, formerly of Conquerall Bank) The death of Robert Eugene Bell, occurred in South Shore Regional Hospital on November 22nd 2019 at the age of 88. Born on July 8th, 1931 at Dublin Shore, N.S., he was the son of the late Captain Leo Eugene Bell and Merchant Sea Master Audrey Evangeline (Oxner) Bell. Bob was predeceased by his only sibling Joan Margaret Bell who died of meningitis as a child.

Bob attended the one room schoolhouse in Dublin Shore, and with the urge to sail, in 1945 he joined his Dad on the Schooner Mavis Barbara at Miami and sailed to St Thomas in the Virgin Islands and Bassc Terr, Guadeloupe and back to the United States. After returning to school to complete two more years, he then shipped out on Ex Corvette Halifax, a banana carrier out of Brownsworth, Texas. Bob was hooked after several small ships and then in the 1960s he sailed with Shell Oil and Imperial Oil tankers. Bob worked on his Marine Engineer’s Certificate and joined the Canadian Coast Guard where he sailed for the next 25 years. The “Alert” and the “John A MacDonald” held fond memories for Bob.

Bob was an ardent supporter of the Canadian Merchant Service Guild, where he had been elected to the position of national executive and eastern Vice-President. Due to his dedication and allegiance to this organization, upon his retirement he was made a “Life Member”. (Awarded February 1994)

As a volunteer with the Conquerall Bank Fire Department, Bob joined in 1968 and was made an honorary member in 1984. He also served for several years as its President and was presented a Life Honorary membership in 2010. Bob also volunteered six years of service with the Bridgewater Senior Wheels, where he also served as its President.  Bob held a LIFE membership with the Royal Canadian Legion, Branch 24, (46 years) and was an active member with the Admiral Desmond Piers Naval Association.  Bob was also a director of the National Association of Federal Retirees for 7 years within his 25 year membership. Further, Bob was on the Board of Directors of the La Have River Credit Union for several years.

Bob loved to dance and had belonged to two local clubs.  Through these square dancing clubs, he travelled to Alberta, Ontario and Newfoundland until sickness, back in 2003, made it impossible to continue with this hobby that he loved so much.

A Celebration of Life Service will be held at the Conquerall Bank Fire Department hall beginning at 11:00 a.m. on Saturday, November 30, 2019 (followed by a social reception).  Funeral arrangements are in the care of  Sweeny’s Funeral Home, 35 York St., Bridgewater. In lieu of flowers, donations in Bob’s memory can be made to the Conquerall Bank Fire Department, Bridgewater Senior Wheels, local VON or a charity of your choice.