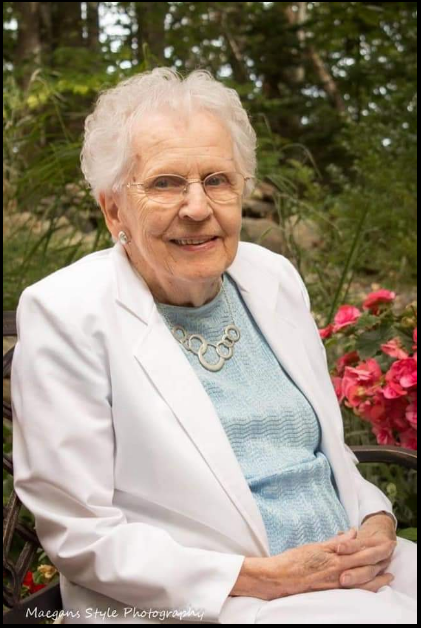 Obituary of Ann May Wynn

WYNN, Annie “Ann” May – Age 98, New Germany, Lunenburg Co., passed away on February 28, 2021 in Rosedale Home for Special Care, New Germany, where she had been residing. Born in Acaciaville, Digby Co., she was a daughter of the late Thomas Edward and Beatrice Alexa (Nichols) Franklin.

Ann grew up on a farm in Acaciaville with her parents, one sister and four brothers. Living through the Great Depression was difficult and she learned how to be very resourceful and thrifty, traits she never lost. She went to the one-room schoolhouse nearby and then went to Digby High School for Grades 11 and 12 (a 6-mile return walk).

Ann met her future husband Elden Wynn while he was the manager of the movie theater in Digby. In 1941, she entered nurse’s training at the St. John Regional Hospital and Elden joined the RCAF. Upon graduation in 1944, she returned to Digby to work at the Digby Hospital and Elden remained in the RCAF until his discharge in 1946. They were married later that year and moved to New Germany, NS where Elden was the manager of the movie theater and became a partner in a little store in the same building. Although the theater eventually closed, over the years, the store was built into a successful business.

Throughout her years in New Germany, Ann was very active in the community. She was a leader with Girl Guides of Canada for over thirty years, a long-time volunteer of the Canadian Cancer Society and an active member of Epworth United Church. When the need for a long-term care facility was identified in the village, she became active in the purchase of land, the construction of the facility and remained a member of the Board of Rosedale Home for Special Care for 19 years.

Ann’s favourite place for quiet time with family and gathering with friends was their family cottage on Lake Peter. The cottage was a special place to her and many days were spent enjoying the outdoors and boat rides through the lakes. The cottage held many wonderful memories for Ann of her time spent there with family and friends. It remains a cornerstone for stories shared by loved ones near and far.

Ann lost the love of her life, Elden, in May 1986. She remained in her own home, enjoying the comfort and company of her Shelties over the years, until September 2015. It was at this time that she moved to Rosedale Home for Special Care. Rosedale indeed became home and a special thank you to all the staff for the wonderful care and support she received over the past five years.

A celebration of Ann’s life will be held at a later time due to current COVID-19 restrictions.

Donations may be made to Epworth United Church or Rosedale Home for Special Care, both in New Germany, NS. On-line condolences may be made by visiting www.sweenysfuneralhome.com.

A Memorial Tree was planted for Ann
We are deeply sorry for your loss ~ the staff at Sweeny's Funeral Home Ltd. - New Germany
Join in honoring their life - plant a memorial tree