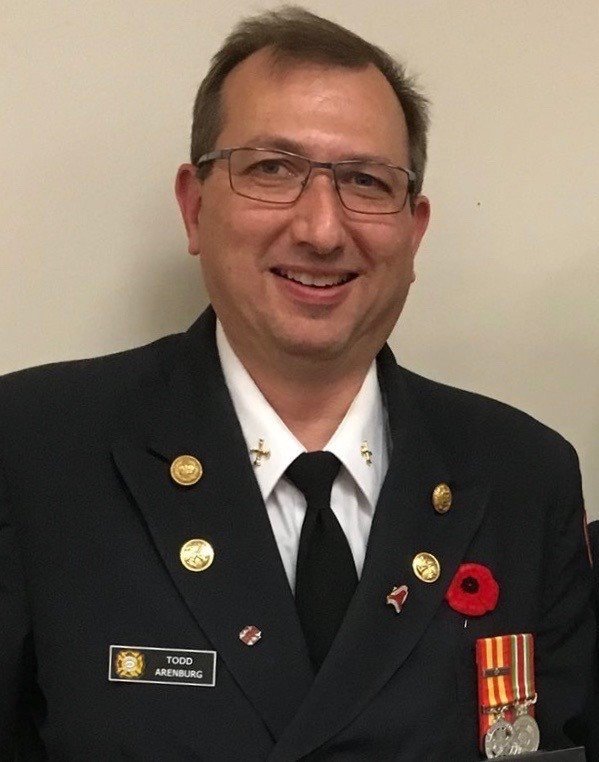 ARENBURG, Capt. Todd A. – 54, of Bridgewater, passed away on April 3, 2020 at South Shore Regional Hospital in Bridgewater, Lunenburg County with his wife and sons by his side after a long battle with cancer.

A volunteer firefighter for more than 38 years, Todd is survived by Anita, his beloved wife and “better half”; sons, Chris (Crystal), Shaun (Jess); grandchildren, Lane and Nora; parents, Dale and Pearl Arenburg; brother, Alan (Patti), plus many nieces and nephews, aunts and uncles and extended family. He was predeceased by grandparents, Oscar and Phyllis Arenburg and Joseph and Beatrice Silver; mother-in-law, Audrey Pangborne and brother-in-law, Tony MacDonald. Todd’s family also included the Bridgewater Fire Department and Emergency Responders from Lunenburg County and farther afield.

A graduate of Parkview Education Centre, Todd joined the Midville & District Fire Department in 1981 and joined the Bridgewater Department in 1992. He was also a member of the Emergency Response Team for the Michelin plant, where he worked for 22 years until he retired in 2012.

Todd trained other firefighters as an instructor at the Nova Scotia Firefighters School in Waverley, where he was on the board of directors. He was also a trainer with the Bridgewater Department, where he was hired in 2014 as Apparatus Technician. It brought him a lot of joy to share his skills and knowledge with others to better serve the community.

Todd spent most of 2019 in hospital in Halifax, where he underwent cancer surgery, and in Bridgewater. Cards and drawings from Nora and Lane were proudly displayed, along with homemade cards from the Grade 5 class taught by his niece, Kim Kown in Oshawa.

It was common to find a firefighter or paramedic visiting Todd in hospital, sometimes adding to his collection of firefighter memorabilia. He didn’t want to talk about his illness; instead he wanted an update on what was happening – not the gossip but how they handled recent emergency calls and how people were really doing. His advice was still sought, and he always managed to share a good laugh, even in his state.

In his final weeks, members from 14 Lunenburg County fire departments drove their trucks past his hospital window and radioed messages of support. Todd, who received the Municipal Long Service Award on March 26, and his family were honoured by this special tribute and a story about the surprise parade even made the local paper.

When Todd shared the news of his terminal illness with his family, he spoke about the things he loved about his life: making memories with Anita, the kids and his parents at the World Juniors in Halifax, cheering on the Mooseheads with the grandkids, visiting New York with Anita, trips to Montreal to see his Habs, all those shared moments, even the tough ones, with fellow firefighters and emergency responders, and so much more. Todd said he’d had “a good run” and was sad to see it come to an end so soon.

A funeral service will be held in Bridgewater after the COVID-19 health measures have been lifted. Anita and family would like to thank Dr. Daniel French, the nurses and staff from Unit 6A at the VG Hospital in Halifax and the staff at South Shore Regional. Donations in Todd’s memory can be made to the Bridgewater Fire Departments Emergency Equipment Fund (e-transfers can be made through bfddonation@bridgewater.ca) or to the Nova Scotia Burn Unit through the Nova Scotia Fire Fighters Burn Treatment Society at www.nsffbts.ca. Funeral arrangements are under the care and direction of Sweeny’s Funeral Home, 35 York Street, Bridgewater. A Celebration of Life will be held at 11 a.m. on Saturday, September 18, 2021 at St. Paul's Lutheran Church, Bridgewater. On-line condolences may be made by visiting www.sweenysfuneralhome.com

Share Your Memory of
Todd
Upload Your Memory View All Memories
Be the first to upload a memory!
Share A Memory