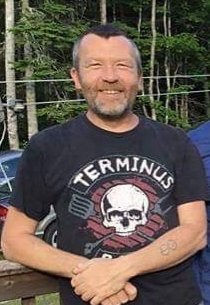 HOGG, David Robert – Age 50 of Mill Village, passed away at home on January 15, 2020. Born in England, he was a son of George and Christine (Clayton) Hogg.

David came to a new life in Canada from England in 1990. He loved Canada and especially living in Mill Village. He worked for Michelin for nearly 30 years and had many friends there. David was known for his stories of his youth and his one of a kind personality. He will be greatly missed but never forgotten by his family and friends.

Funeral arrangements are under the care and direction of Sweeny’s Funeral Home, 35 York Street, Bridgewater where a visitation will be held from 7-9 p.m. on Thursday, January 23, 2020 and funeral service will be held at 11 a.m., Friday, January 24 with Rev. Willis Ott officiating. A burial will be held in the Mill Village Community Cemetery, Mill Village following the funeral. Family flowers only please. Memorial donations in David’s memory may be made to a charity of one’s choice. On-line condolences may be made by visiting www.sweenysfuneralhome.com

Share Your Memory of
David
Upload Your Memory View All Memories
Be the first to upload a memory!