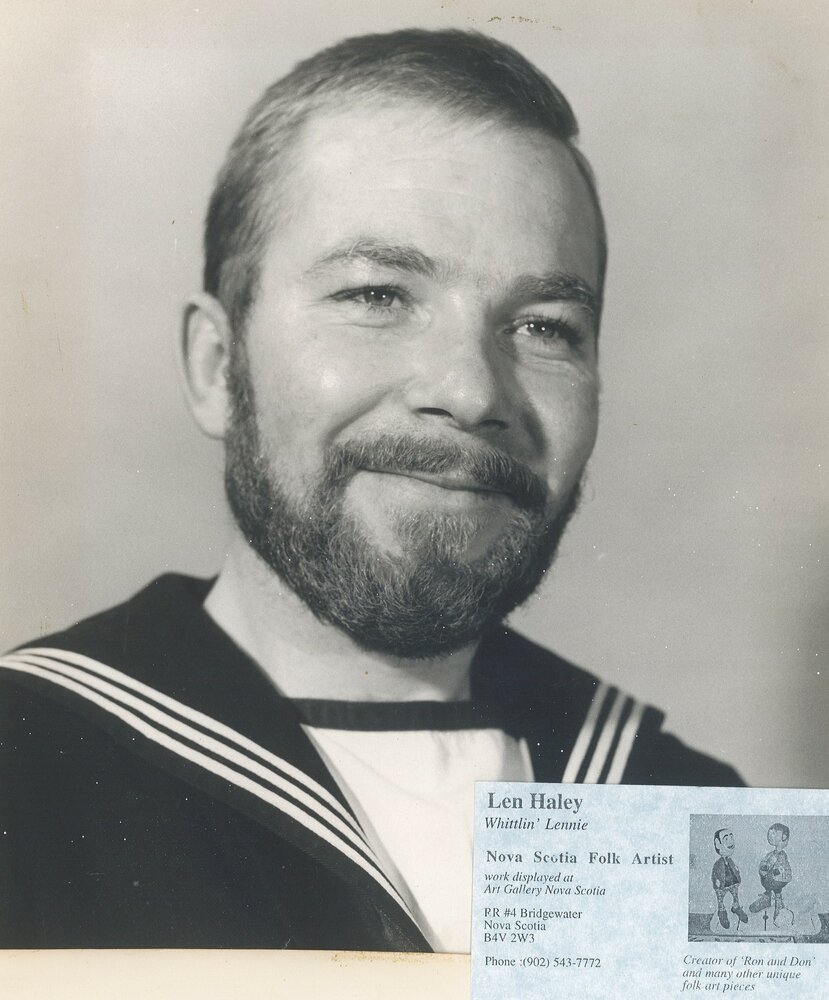 It is with profound sadness that the family of Petty Officer Leonard C. Haley announce his passing on September 23rd at the South Shore Regional Hospital. He died peacefully, surrounded by his family, at the age of 82 years. Born in Glen Road, Antigonish Nova Scotia on April 1st, 1939, to the late Joseph and Mary (Jones) Haley.

Leonard joined the Canadian Armed Forces on May 1957 sailing on various destroyers and frigates such as the HMCS Nootka, Haida, Bonaventure, Preserver, and the Chaudière. His fondest memory was taking his two sons out on the Preserver for 10 days when they were younger. He loved serving the military and always expressed that if he was younger, he would do it all over again. After the military, Leonard worked for the South Shore Regional School Board prior retirement.

An avid woodcarver and painter throughout his retirement, Leonard (aka Whittlin’ Len) was also recognized as a local Folk Artist in Lunenburg County.  He spent many summers attending the Nova Scotia Folk Art Festival where he proudly displayed his craft.  Many of his pieces can be found around the world.

Len had a passion for playing games with family and friends; a competitive player in cribbage, Risk, horseshoes, and Texas hold’em poker.  Most times, he would just prefer sitting around the firepit, listening to country music and share stories & jokes with others.

At the family’s request no visitation or service will be held at this time. Memorial Donations may be made in memory of Leonard C. Haley to the Hebbville Academy Breakfast Program, or the South Shore Regional Hospital.

The family wishes to send a special thank you to the staff at the South Shore Regional hospital, the EHS Staff who attended Leonard at the home and the RCMP.  Also, a special thanks to Jan and Dr. Riding for their care and compassion. Arrangements entrusted to Sweeny’s Funeral Home, Bridgewater where online condolences may be made by visiting www.sweenysfuneralhome.com

A Memorial Tree was planted for Leonard
We are deeply sorry for your loss ~ the staff at Sweeny's Funeral Home Ltd. - Bridgewater
Join in honoring their life - plant a memorial tree

Share Your Memory of
Leonard
Upload Your Memory View All Memories
Be the first to upload a memory!
Share A Memory
Plant a Tree