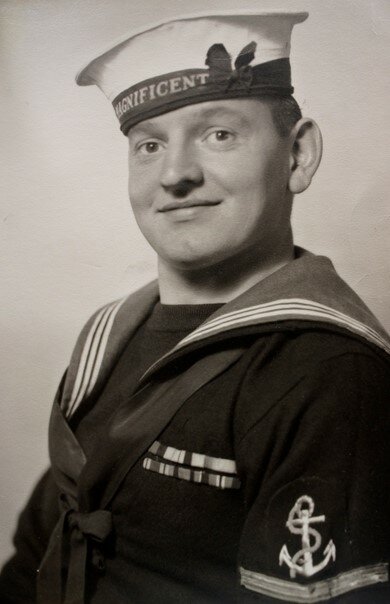 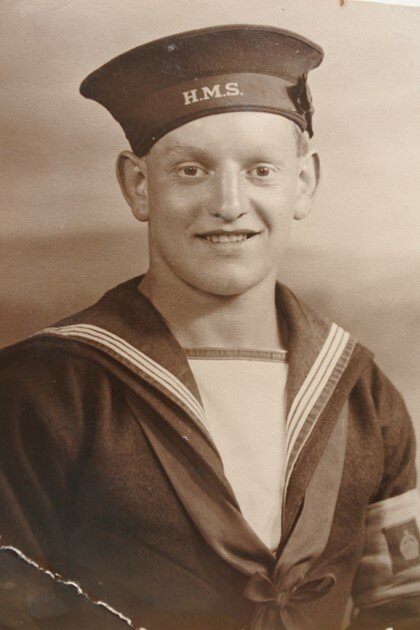 An extraordinary man born into a lively working family of 11 in the industrial heartland of England. From a young age he biked several paper routes and magazines daily. He enjoyed tennis, judo, wrestling and running. He biked all over England by pedal and later, on his Triumph Speed Twin. Les had a huge personality who loved work, music and believed in a positive attitude. Always being polite & responding to everyone. He worked at AMAC & GE Laboratories as young man. Leslie lived an eventful, active, and full life steeped in history. As a young cadet he was trained to command a rocket anti-aircraft station plotting nightly attacks. At 15, part of the Home Guard during the Blitz. He loved to watch the spitfires being built at Castle Bromwich airfield and sometimes see Alex Henshaw flyby.

By 17, Leslie had volunteered for the Royal Navy posted throughout England, Ireland, Scotland, New York, and Trinidad. He was at Lee on Solent (HMS Daedalus) for D-day on May 8th, 1945, and finished his service in Arbroth, Scotland in 1946. Les lost many friends, neighbors, fellow sailors, and aircrew, but always spoke of the good events during the war too, like seeing Bob Hope at Burton Woods, UK, dancing with Judy Garland at the Stage Door Canteen and dinner with Jack Dempsey in New York.

Les immigrated to Canada in 1947 landing at Malton (Pearson) Airport with 37 other Brits on a 20-hour flight in a 4 engine Sky master. He went to work for Avro Arrow as an Electrical Engineer. In late 1948 he joined the Royal Canadian Navy at RCNAS Dartmouth (Shearwater) until 1957. He sang with the Dartmouth Opera Company briefly but played and sang music daily with a joy filled with memories.

Married to Janet Boutilier and having a daughter, Heather, they moved to Ontario (Davis Controls) where their son Mark was born, then onto Vancouver, BC.

Les started his own engineering company, Southwell Controls Ltd. and from 1960 to 1980 worked with industrial mining, pulp mills, wheat pools and power dams in British Columbia, Alberta, Saskatchewan, Oregon, and Washington State. He created the curriculum for BCIT electrical training program and worked on many interesting and challenging projects.

Leslie traveled with BC trade missions for Technology Products to Europe.

In 1967 Bob Swanson of Burnaby’s Airchimes hired Dad to come up with a Centennial year project using his airchime horns for a train. Les invited him up to his West Vancouver home and played the first 4 notes of Oh Canada on his organ. Bob liked the idea and dad made a step valve to lower the voltage to match the diesel train which was attached to an array of Airchimes horns and secured on the centennial train for 1967 cross Canada trip to Expo. Later, Les changed it back to AC power for the roof of the BC Hydro Building where the noon horn sounded until 1994. Since 1994 a digital not mechanical control is used to operate the horn atop the Pan Pacific Hotel at Canada Place. Dad never received any credit for the idea or for executing it. It was a job that he enjoyed and was paid for.

In 1980, Les and his wife Janet lost their son and decided to return to Nova Scotia to follow their daughter and son in law’s dream of farming highbush blueberries and starting a winery. So, from the mid 1980’s, Les began lobbying for legislation for a license for fruit wineries based on 100% Nova Scotia grown fruit, which in 1993 paved the way for Lunenburg County Winery and those that followed. A pioneer of the wine industry, Les lived on the farm for 42 years and always answered the phones with humour and chat. He enjoyed the paperwork or even making soup for lunch until a week before his passing.

According to his great grand girls when asked about Les they replied, “He loved to play checkers & tell us stories”. Leslie was our lighthouse, our anchor, our heart of oak. It was a privilege to love him for 67 years and be his daughter. Les was a past Mason and Shriner. Life Member of ISA (Instrumentation, Systems and Automation Society), Shearwater Aviation Museum Foundation and Admiral Desmond Piers Naval Association.

father and mother in law, Elmer and Jennie Boutilier (Dartmouth,NS)

Heartfelt thanks from our family to Dr John Jenkins who cared for Leslie over so many years and Dr David Martell. Cremation has already taken place. No funeral as requested. Donations in Leslie's memory may be made to the Health Services Foundation of the South Shore Hospital.

A Memorial Tree was planted for Leslie
We are deeply sorry for your loss ~ the staff at Sweeny's Funeral Home Ltd. - Bridgewater
Join in honoring their life - plant a memorial tree

Share Your Memory of
Leslie
Upload Your Memory View All Memories
Be the first to upload a memory!
Share A Memory
Plant a Tree